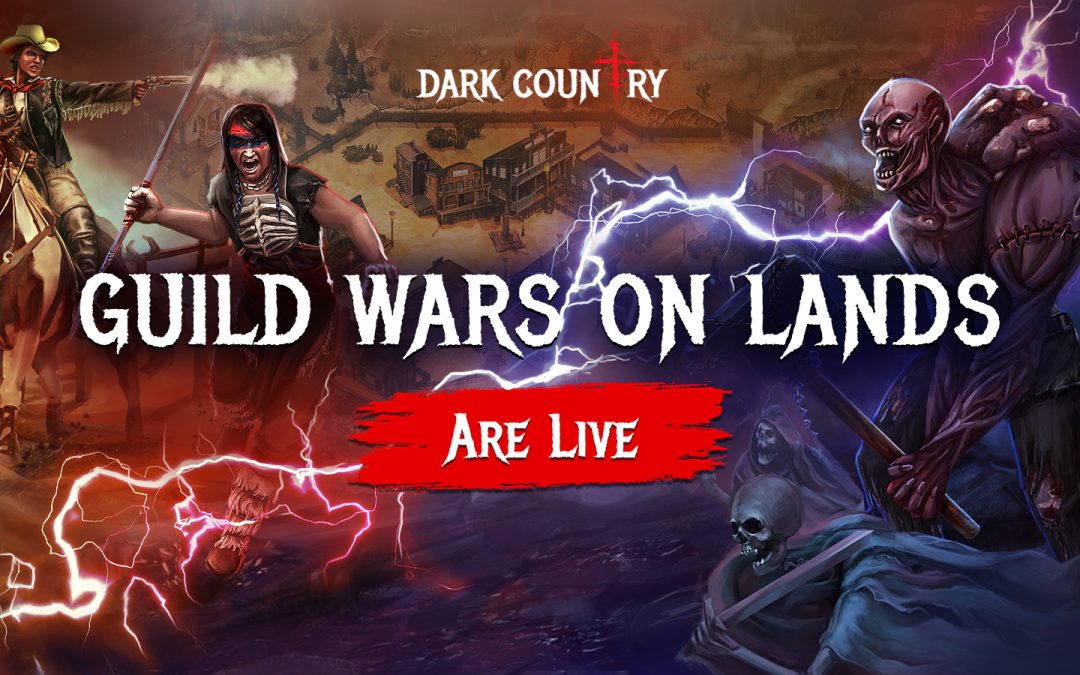 More updates, more fun! We have launched the long-awaited Guild Wars on Lands! Let’s take a deeper view of their tweaks.

What are Guild Wars?

Guild wars are battles between soldiers of two lands. The Guild namely is a union of Landlord and Soldiers.
Landlord (or Landowner) is the player who owns and uses Dark Country Land NFT and creates game activities for soldiers.
Soldiers are card game players and the backbone of landowners – no activities can be conducted without them.

Guild Wars are managed in Town Hall on the Land layer.

The level of the Guild House determines the number of Soldiers that can be hired:

Despite the Soldiers being part of the guild, they cannot participate in more than 1 Guild. However, landlords can invite soldiers even though they are already in the Guild.

SoldieSoldiers receive daily salaries as long as they work with Landowner. At this point, salaries depend on the soldier’s rank. The landowner, in turn, sets salaries separately for every soldier’s rank.

The number of soldiers per rank entails the following:

Thus, soldiers receive salary before the Landowner gets his cut off the daily SDM pool.

If there is insufficient SDM for every Soldier, salary is distributed from lower ranks to higher. Soldiers may dispossess a salary if there needs to be more SDM to distribute.

What are the Rank Points?

Rank points (RPs) are properties soldiers receive depending on the activities they join. Winning those activities result in higher RPs. Soldier’s rank allows the Landowner to see the engagement of a Soldier.

In short, the Rank Points of every soldier are calculated via a general formula including the number of wins, losses, and all resources obtained from Quests.

Firstly, landowners set up attack orders to their soldiers’ heroes and card decks to beat other Guilds. After the attack order is ready, soldiers from both Guilds (attacking and defending) can join the fight from the Guild house (client side) or in-game e-mail message.

Successful attacks grant Influence to the winning side and reduce the influence of the one who lost. After the battle, both attacker and defender lose some Vitality.

What is Vitality? Vitality implies “HP” points of the land that are determined by the rarity of the land.

At the same time, losing vitality in guild wars is the reverse of regeneration. Heroes with the lowest level and rarity lose vitality first. Land’s vitality decreases the last.

At first, the attacker chooses Guild from the list of Guilds (except inactive Guilds or Guilds that are already in a fight) and waits for a one-hour preparation process – the delay between choosing the Defender and launching the battle.

At the end of the battle, the player with the last Soldier standing alive after all rounds is a winner. The winner gets 50 influence points, the loser burns up 50 influence. Both players receive a detailed report after a battle on their in-game e-mails.

The traits of Soldiers in Guild War

Soldiers get an equal portion of SDM from a reward set up by the attacker. So only soldiers that win can divide a prize. If attacking soldiers lose the battle, defending soldiers will share the prize.

Burning of SDM during Guild War

10% of the SDM reward pool is burning. Given that, winners get and divide 90% of the SDM prize pool provided by the Landowner.

Thank you for reading till the end and being the form of our inspiration!