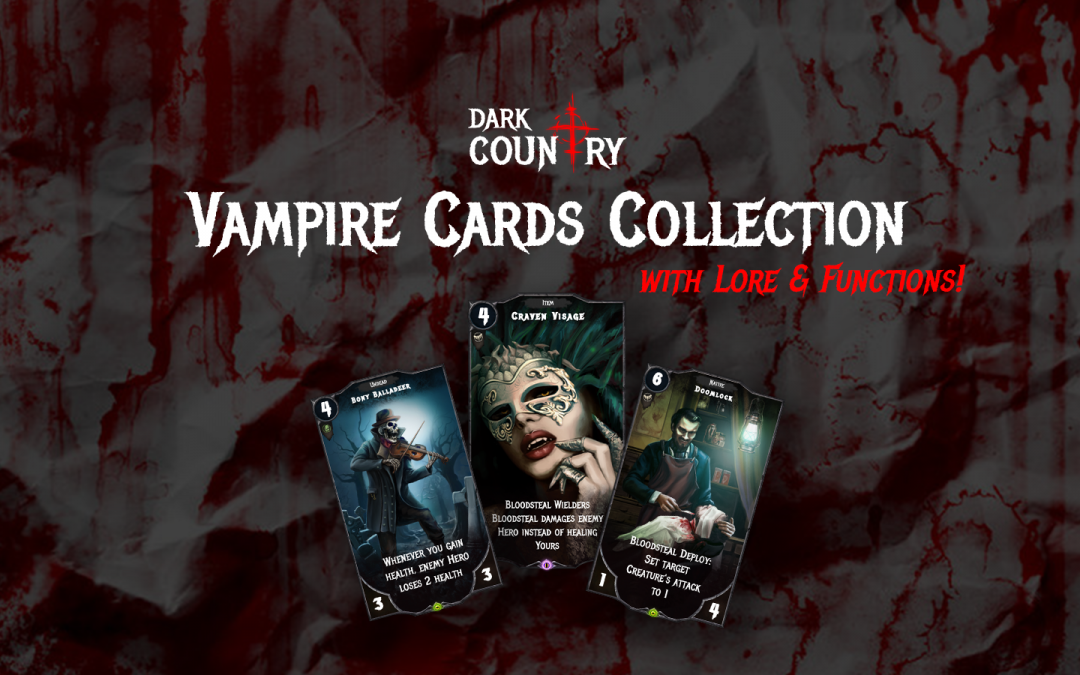 Today we want to introduce you to more cards from the Dark Country Vampire collection & their story! Discover below:

The citizens of the Dark Country were becoming accustomed to their chaotic but predictable lives of battling, dying, and always being resurrected to battle again another day.

The Ancestral Guard, the Resolute Rangers, the Cunning Crusaders, the Destructive Horde and the Cultists were all on the verge of reaching some twisted form of relative harmony in their shadowy existence, but everything was about to change.

Nothing comes from nothing and darkness always begets darkness; perhaps no one understands these truths as well as the citizens of the Dark Country. Still, when power even more frightening from the depths of the forgotten ancient world revealed itself, they never saw it coming.

People began disappearing suddenly after midnight and screams of terror upset the stillness of every night. It was not until the shadiest corners of the streets were stained with blood and their ghastly work was well underway that the Vampires made themselves known.

It was a hot and sticky moonless night of summer, and the bartender was polishing his glasses. It was nearly closing time, and the only patron who remained was the drunken fool in the corner, stammering and blathering mindlessly as if anyone was listening.

The cacophony of grasshoppers and locusts outside was so loud that the bartender had to shout over it to get the attention of the drunkard. “Maynard! Get on now! Time fer closin’ up!” The drunk ignored the bartender. Suddenly the locusts and grasshoppers stopped all at once as if ordered to silence by the conductor of some nightmarish symphony.

Maynard looked at the bartender with confusion, then both men were startled by the front door as it swung open with a deafening creak. Standing in the open doorway was a beautiful woman with flame-red hair.