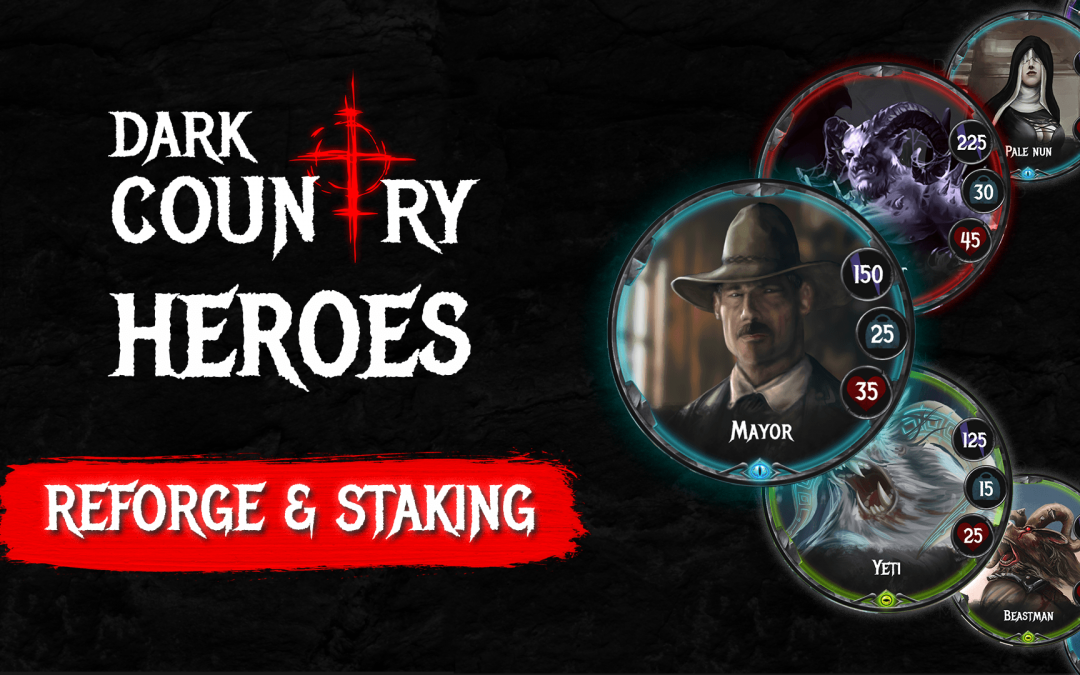 Reforging is a process of burning 4 heroes of the same type (type is defined by name) and rarity into new improved ones.

There are 4 levels of reforged heroes. Reforged heroes can be used for staking, as it improves staking rewards. Here’s a table of staking rewards based on rarity and level. When a hero is reforged a new hero will appear with max stats of heroes of that particular rarity.

Each level consists of 4 items of the previous level, so if you have 4 rare heroes (say Easy Rider) you will receive one Lvl1 Reforged Rare Hero (Easy Rider).

Staking is part of the Dark Country economy, it will be enabled by February 1st 2021.

For the first 8 weeks staking rewards will come from a pool that has fixed and variable parts.

Fixed pool has different WAX funds per week for an initial 8 weeks (and more), granted by Dark Country team. The variable pool has 2.5% fees from secondary market fees on the Atomic Market only from the previous week period.

After 8 weeks the staking pool will consist only of fees from the secondary market, but we will add some NFT rewards as well.

Staking also will have weekly leaderboards, for TOP 5 places. We will distribute Dark Country packs to those who are at the top of leaderboard.

Note. Leaderboards are subject to change, as we will have limited remaining promotional Hero packs.

The staking week ends at 12PM UTC on Monday, so all rewards will be executed at that time and a new cycle will start.

Once you stake your hero, rewards are starting to accumulate. If you unstake a hero anytime before rewards are distributed, you will lose rewards for that hero.
Once you’ve staked your hero, we start counting how many seconds it was staked per hero per week.

This makes a simple formula –

The stake value is a relative value, that also will be used to get paid per one hero.

We are enabling staking based on rarity.