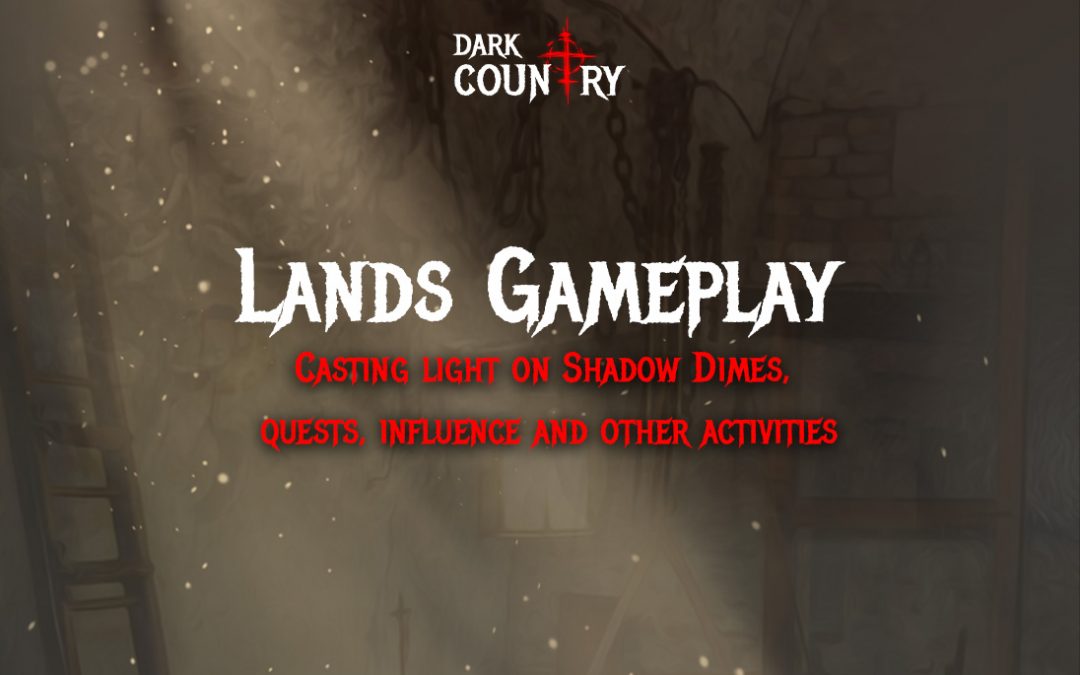 Today we’re here to cast some light on the upcoming Dark Country play 2 earn Lands-based gameplay and share some details on how it will work.

Nota bene: this article provides the general overview on Lands-based gameplay mechanics in Dark Country and all the numbers, activities, etc. are subject to testing and change until the official release and possibly – afterward too.

So, let’s first have a short recap on what the Lands of Dark Country are and then go deeper into details of gameplay mechanics.

What are the Dark Country Lands?

The Dark country lands are the ultimate game assets that players can own in the Dark Country universe. Landowners compete with each other for influence by creating game activities and rewarding players with game tokens for participating in them.

Shadow dime (SDM) is Dark Country’s main currency. It is used to reward players and landlords for their activities. Players can use it to purchase game assets and trade them on exchanges.

Influence – the key parameter a LandLord should work on

The influence of land is an indicator of the land strength in the dark country world.

Depending on the land rarity, a Rarity Multiplier is applied when the landowner is rewarded for the completed activity on his land.

The higher the land rarity, the higher the influence You get from the same activity. The Rarity Multipliers are still a subject to be calculated and will be announced closer to the Lands Gameplay launch.

To encourage players to play the game actively, influence points always deflate. The deflation rate is dynamic and increases exponentially when influence rises. See the example below:

The deflation rate can be reduced by staking SDM on the land by landlords and players. Below you can see an example of how it works (please, note that this chart as well as all the others are for illustrative purposes only!)

Main goal of Landowners is to make their lands attractive to players by hosting activities on their lands.

Passive PvE activities that are available through Dark Country lands. Players build decks around their heroes and send them on short quests and get rewarded with game resources and Shadow dimes. Upon completion, part of the resources will go to the owner of the current land.  The number of available quests depends on the level of the tavern building and can be boosted by external locations on the world map.

* Later will depend on the tavern level.

Landlords pick from the list of offers and start a contract.

Creating custom tournaments for players is a powerful way to increase the influence of their land.

Landlords can fight with each other by placing attack orders on other lands. Successful attacks grant Influence for the winning side and reduce influence for the one who lost.

And that’s not even all we have to offer, but not everything and not at one time, folks;)

More details to come, more adjustments to be made.

And please, keep in mind that all the numbers and mechanics are subject to change as we’ll develop the concept and production!