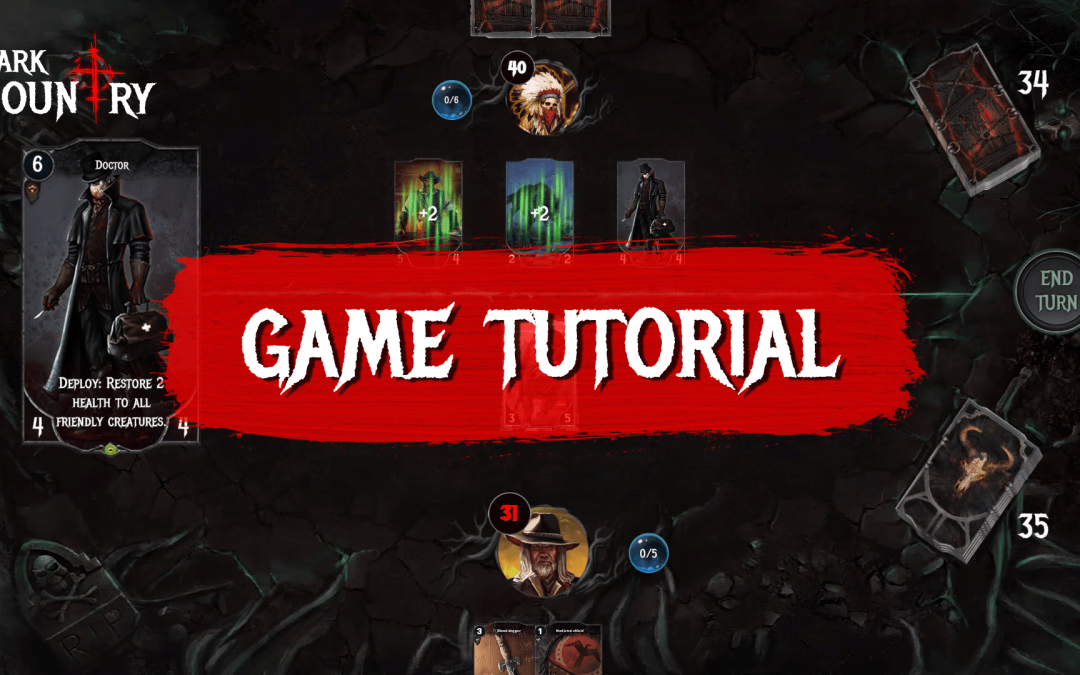 What is Dark Country?

Dark Country is a free-to-play NFT TCG in the American gothic setting. The Alpha version of the game is available for PC and it is planned to launch a mobile version as well.

In the game you:

📍 pick one of four races

📍 build your deck of cards with creatures, spells, and items and are pitted against another player online to defeat

📍 you win when you reduce your opponent’s health to zero!

First steps in the game🎮

Once you are in, the first thing you need to do is choose your race and build your deck.

When your deck is completed — press DONE and go to the Main Menu. You are ready to play your first round!

Each Dark Country card has its own stats, text, and abilities that are shown on it.

We will consider the card structure using the example of the Creature type since this type is filled with elements. Spell and Item cards are similar in structure, only they lack some elements, such as Attack and Health.

The game has 4 types of Creatures:

This mark indicates the restriction on the presence of more than one such card in the deck. Such marks will mainly have Mythical cards.

This indicates whether the card belongs to any race. The game has 5 races:

For Spell, this indicates the effects that will happen when the card is played. For Creatures and Items, it also tells you about any ongoing abilities the card has.

Also, the majority of cards have some additional abilities (Keywords) described in the card text box.

The keyword is a game mechanic in Dark Country. Any keyword gives different status effects to cards. Keywords can be changed, added, or removed with various cards.

Any creature damaged by Oneshot is destroyed.

Other creatures or target spells can’t target creatures with Stealth.

Rooted creatures skip their next attack

After the creature is attacked and killed, all extra damage dealt is inflicted on the enemy hero.

A creature with spell immunity can’t be targeted by spells. Can still be damaged by AOE spells.

Guardian absorbs the first attack on the creature, and after that, it is destroyed.

Muting a creature destroys its items, stat modifiers, and keywords.

When cards with deploy are played bonus effect is triggered.

When creatures with Last Word die, a bonus effect is triggered.

Creatures with Frenzy can attack right after they are played. When a card with Inspire is played, the totem is created on the table. If the totem is already in play it upgrades by one level.

Search your opponent and play!⚔

When you are ready to play — press “PLAY”. The game will start to search for an opponent for you.

Since the game is still at an early stage of development sometimes it might be no matchmaking for some time. To make it faster you can ping someone from our communities:

Once the opponent is found you will appear on the game field. Before the round will start you will see your first 3 cards and will be able to change them if you want.

If your turn is second — you will get an additional card.

Every turn, players draw a card and earn mana. Mana is expended to cast spells or summon creatures or items from a player’s hand; the more powerful the card, the more mana is needed to play the card.

At the start of every turn, 1 mana is added to the maximum mana pool, and mana reserves are replenished to be able to play more cards.

Mana ultimately represents a unit of power you can apply to the board. At the end of your turn, you get nothing for unused mana, so make sure to use as much of it as possible every turn. For example, if you have six mana to play with, you’re likely better off playing two three-cost cards rather than a single five-cost card and leaving a one-mana crystal unspent.

Players act alternately. Each turn player can use cards from hand to place them on the board, cast spells, and deal damage to the opponent’s hero or creatures. The game round ends once one of the heroes runs out of health points.