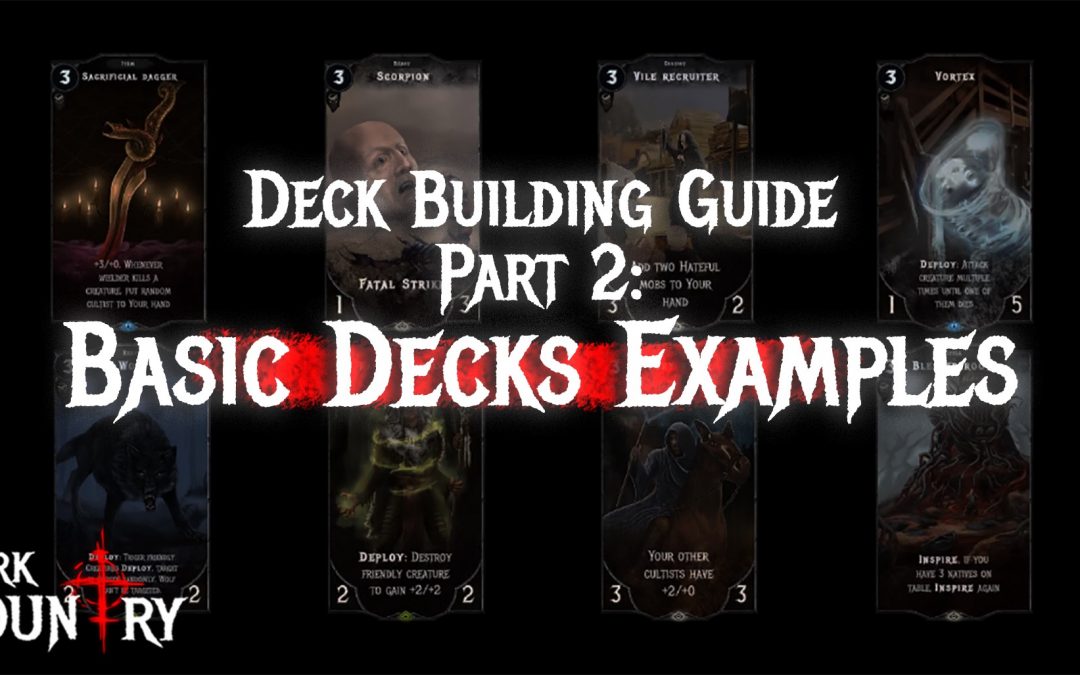 Today we’re back again with the 2nd part of the Deck Building Guide by Barry Smith aka NFT Decree. You`ve read the 1st part on how to build a successfully balanced deck for your Dark Country game⚖. Now get ready to read about How to play with them dream-decks!

💬If you just want some decks to have fun, then below is one pre-built deck from each faction to see what each faction has to offer. Once you know what style you like, then make some tweaks and changes or scrap them and build your own.

AG are the faction with the most powerful spells and ability to control the board, this deck takes advantage of that by keeping the board small and putting down some powerful monsters, like Old Chief.

Shadow’s Last Word ability puts a random spell into hand so don’t be afraid to trade with your opponent’s creatures, especially if they can do more damage.

Qalupalik immediately adds an AG spell to hand, which is always useful in this deck, even if it is only Fortify. Bless draws cards to give you more options to control the board, whereas Fanatik can shut down early abilities like Fatal Strike or a buffed Mountain Lion.

If you are ahead on tempo, you can then play Dark Watchers, but if your opponent has swarmed the board or has one big creature you can Fire Spirit to remove it.

Try to control your opponent’s board with Banshees (hit a big creature with a Shadow and then play Banshee to destroy it), Fire Spirit, Hanged Lady, Archers, and Brainwash.

You can try to finish the game with Ritual Master, Old Chief, or Piasa plus Lightning Strikes. Keep their board small with Van Meter Monster and Sinful Shepherd, before dropping Sylvia to get some card advantage and spells to trigger your Old Chief.

This midrange deck works to stay alive using the Crusaders unique ability to gain Charon’s Obols (CO). Charon’s Obols are 0-cost cards which heal 2 HP to your hero but have synergies with other cards in the deck to reduce cost, deal damage, or increase attack.

Your opening curve is to play Bandit > Liquidator > Owlbear/Silver Bullet > Gambler/Vengeful Soul. You want to generate and keep Charon’s Obols early, so Bandits put one in hand on deploy.

Your early cards are going to be quite weak so playing Liquidator helps ensure that you can trade cards on an even basis with the Fatal Strike ability. If your Bandits are still on board and you have to deal with a large creature, the Silver Bullets are as effective as a removal spell for dealing with them. If you have space (and the cards) you should be able to play an Owlbear to pressure your opponent.

Gamblers can generate two COs when played and Vengeful Souls generate one CO at the end of each turn, keeping them alive can be beneficial.

Now you should have around 4 COs so can play two to heal damage and replace them by playing The Horse Thief.

Push out damage with stealth for Crow Queen and Darkrider by adding Cursed Whips, while using Widow/Pandillera, Brainwash and Sinful Shepherd to keep the board in check.

Be careful not to have too many COs in hand but keep some for your end game plays.

If you have 6 COs then Gunslinger can act as a board wipe while recovering your health. Bounty Hunter should do significant damage, especially if you pair it with a Beastman next turn. The cost for Wild Bunch should be cheap and be an additional level of pressure for your opponent before you kill them.

This is a sacrifice Aggro deck that uses a few combos to deal damage as quickly as possible. Ignore the enemy creatures where possible and go for the head! If it goes beyond turn 10 then there is a good chance you won’t be winning!

While you won’t always see a Zombie and not playing one is okay, if you do then a first turn 2/2 body is hard to deal with, particularly if you are going first. Because you might be up against Owlbears, then Liquidator as a defensive card is good to get down before they do. Dire Witch is a card you want to keep alive for as long as possible. Whenever your hero takes damage you will get a 2/1 Cultist and you want creatures on board for damage and to sacrifice.

Once Dire Witch is down you can swarm the board with Reanimate, Renegade, or Skeleton Priest (you can do this turn 3 if you’ve no Dire Witches).

The aim is to have the most creatures dealing damage, so ignoring the opponent’s ability to damage is fine, as long as you can do more, but Skeleton Archers, The Tortured, Raining Blood, and Bear Rider help stop the bleeding. Use The Tortured for unfair trades if your opponent has hit it but not killed it by attacking and being destroyed by a second creature as the game remembers who has attacked it between turns.

Once you have as full a board as possible, use Intimidation to pop a Renegade (don’t forget to attack with it first) to give you up to +12 damage in a turn.

A follow up with Grim Chariot for another 10 damage can finish an opponent by turn 8 easily.

There is not much late game in this deck and this deck is vulnerable to board wipes, but not everything always goes to plan, so you need to get creative!

Ritual Masters help to establish a board again, as does Enforcer and Dead Army. If you can draw Sinful Shepherd before a Grim Chariot you can be sure to have a hand of cards for next round, and repeatable cannon fodder to destroy, but don’t count on it happening.

These cowboys have access to a lot of Fortify skills and the ability to punish your opponent for killing them, along with some not insignificant firepower to shoot back with.

Your opening curve is to play Barrel/Agonizing Follower > Liquidator > Bartender > Owlbear/Sharpshooter (with a gun in hand).

Early Fortify cards mean that your opponent is forced to attack your creatures instead of you until you can get set up with some stronger cards. Liquidator again serves the purpose of helping deal with some larger creatures early in the game.

Once Bartender is down you can stock up on beverage cards which either give +1 attack or +1 health, use these to keep your defenders alive or save them for the mid game.

If you have Burning Colts or Sheriffs Guns in hand then Sharpshooter comes down twice, which does reveal something about the contents of your hand, so be careful.

Mid Game is all about getting Gatling teams down and then having your opponent kill your Fortify creatures to damage their own board while attacking back.

Easy Rider is a Fortify creature that can replace itself with more Fortify Barrels and Cowboy can pull the 8-cost Burning Colts from your deck into play for a devastating attack the next turn (if it survives).

Late Game is usually just looking to close out with enough damage.

Sinful Shepherd is only if you get too far behind. Butcher with a gun can be difficult to remove, particularly behind Fortify. Spectre and Banshee are ‘get out jail’ cards for removal but you should hopefully have defended well enough that trading body blows with the enemy hero has you far enough ahead to edge it.

“Everyone has a plan ‘till they get punched in the mouth.” — Mike Tyson

Card games by nature incorporate luck. It is likely that the order of cards in a shuffled standard deck of cards has never occurred before (1 in 52! or 1 in 8.06e+67). Even though Dark Country decks are smaller and contain fewer different cards, you still might not see any of the cards you wanted on the turn you wanted.

Sometimes saving cards instead of using your mana is the right choice. If you can only play your boss monster and your opponent has a Scorpion with Fatal Strike down, then you are not going to improve your position by letting them kill it next turn. Wait until you can remove the Scorpion and then play your big card.

Always look for lines of play that improve your chances of winning. If you could play three 2/2 monsters this turn but expect your opponent to have a board wipe spell, then try to give them the fewest possible creatures to target while still being threatening. Don’t waste an attack on a 1/1 creature with your 5/5 if you don’t think they can keep pace with the damage you are doing to their hero. If you have to sacrifice a creature make sure you have attacked with them that turn before removing them from the board.

All these decisions and more will come naturally from experience of playing.

These decks are designed to be fun and functional but would likely lose to a true tournament deck. When playing, look for cards that don’t work the way you want or evaluate other cards that would be better/do something different in those slots.

Don’t be afraid to learn from your opponent. When you get beat, think about what way you could have played differently or what card would have won you the game, even if it wasn’t one in your deck. Then you can think about whether it’s worth including that card in future games. If they played a card that roundly beat you, could you include that in your deck and do the same?

There are a number of neutral cards that are very powerful and could replace comparable cards in each faction.

To start with, can you find a card that is ‘strictly’ better than Escaped Convict in the CC deck? A card is strictly better if it has additional benefits with no downsides like lower attack or health.

Hopefully, this is enough to start you on your deck building journey and enjoying what Dark Country has to offer💬

And again, big thanks to Barry Smith. He has been playing (but not always winning) competitive card games for over 25 years. Currently he helps companies bring their brands to the blockchain via his company, NFT Adapt.

Got ideas on how to improve these decks or want to share a deck of your own? Feel free to message us in our Discord Influencers channels.