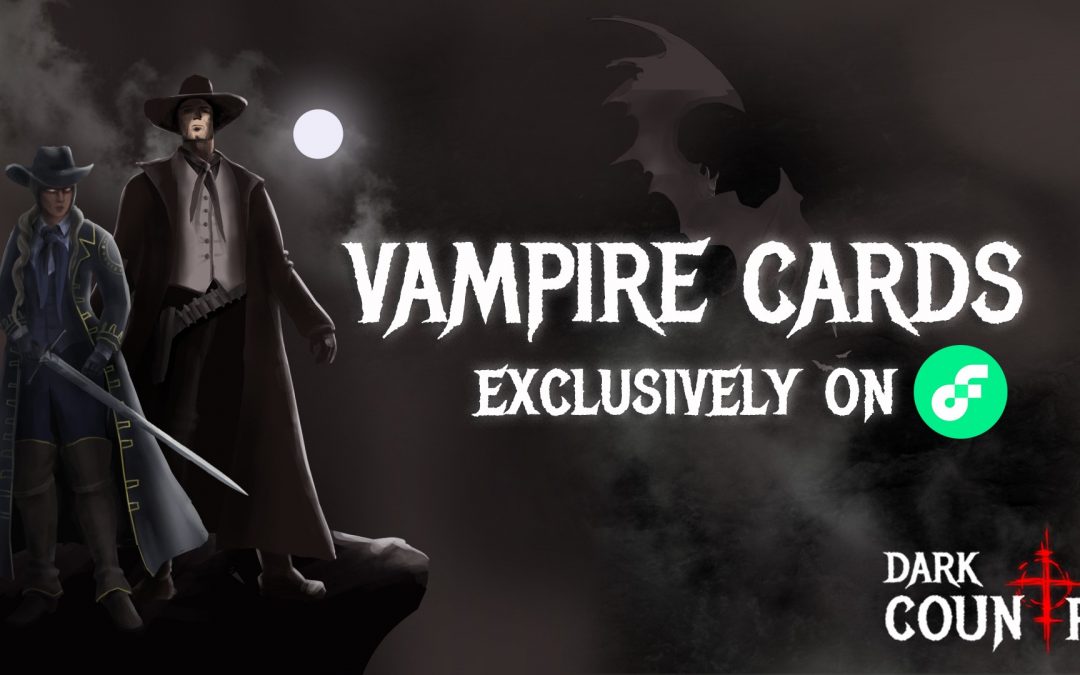 Greet the Vampires of Dark Country💀

Hello, Dark Country Fans! We know that you are looking forward to the Land-Sale. While we are arranging everything for the successful sale event, we want to introduce you to the Exclusive Dark Country Vampire Cards Set.

We’ve created a set of 50 unique vampire cards that will be exclusively offered within the Land Sale packs for the FLOW users only. A new set of cards will consist of:

The citizens of the Dark Country were becoming accustomed to their chaotic but predictable lives of battling, dying, and always being resurrected to battle again another day. The Ancestral Guard, the Resolute Rangers, the Cunning Crusaders, the Destructive Horde and the Cultists were all on the verge of reaching some twisted form of relative harmony in their shadowy existence, but everything was about to change. Nothing comes from nothing and darkness always begets darkness; perhaps no one understands these truths as well as the citizens of the Dark Country. Still, when power even more frightening from the depths of the forgotten ancient world revealed itself, they never saw it coming. People began disappearing suddenly after midnight and screams of terror upset the stillness of every night. It was not until the shadiest corners of the streets were stained with blood and their ghastly work was well underway that the Vampires made themselves known.

It was a hot and sticky moonless night of summer, and the bartender was polishing his glasses. It was nearly closing time, and the only patron who remained was the drunken fool in the corner, stammering and blathering mindlessly as if anyone was listening. The cacophony of grasshoppers and locusts outside was so loud that the bartender had to shout over it to get the attention of the drunkard. “Maynard! Get on now! Time fer closin’ up!” The drunk ignored the bartender. Suddenly the locusts and grasshoppers stopped all at once as if ordered to silence by the conductor of some nightmarish symphony. Maynard looked at the bartender with confusion, then both men were startled by the front door as it swung open with a deafening creak. Standing in the open doorway was a beautiful woman with flame-red hair.

She was impeccably dressed and her pale face wore a smirk of arrogance. The bartender stifled a shiver from his core as the woman slowly took in her surroundings. The street lamp directly outside should have been casting a long shadow of the woman directly onto the floor in front of him. He’d seen it a thousand times, but this time there was no shadow.
She strode into the room as gracefully as any woman he’d ever seen, more like gliding than walking. Approaching the bar, she turned her head slightly to look at Maynard the drunk, who was unable to stifle his own shiver. Instead, he reached for his poncho, wrapping it around his body like a child hiding beneath its covers in the throes of a bad dream. Finally, the woman reached the bar, where she leaned in close to the wide-eyed bartender. She looked at him like a hungry cat addressing its prey, then licked her scarlet lips and introduced herself as Carmilla. “One glass of red wine for me, darling,” she said in a voice deep and rich with secrets. The bartender completely forgot that it was closing time, and not long after that, Carmilla’s friends arrived.

Be on the lookout for mysterious new evils and strange creatures of darkness when you take to the battlefields: Succubi, Ghosts, Gargoyles, and other nightmare spawn. Help to fight off bloodthirsty Vampires and beasts from the depths of beyond. Or don`t — we can`t tell you what to do.

Vampires introduce a new card mechanic — Bloodsteal: is an ability that causes damage dealt by a card to also restore that much Health to the controlling player’s hero. This includes both damages from attacks, abilities and effects from what has Bloodsteal.

With Vampires your hero can live much longer…😈

*The Vampires are neutral cards you can use for any deck.

How to get Vampire Cards?🙌

Now you can get Vampire set cards only by purchasing a Dark Country Land pack for Flow.

Thank you for checking out what we’ve been working on, we look forward to seeing you battling out in the Dark Country soon!☠